With GDP Warning Signs Flashing, Where Does the U.S. Economy Go from Here? 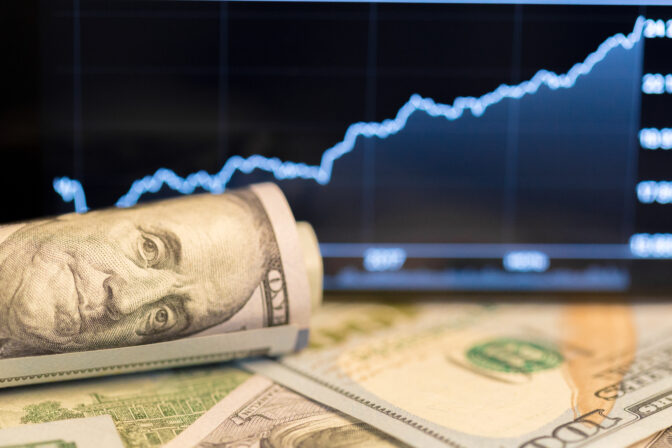 Measuring the gross domestic product (GDP) growth rate has long been a standard used to demonstrate economic activity, although the official estimate from the U.S. Bureau of Economic Analysis (BEA) is reported after the fact and limits the insight we can derive from its changes in real time.

The U.S. GDP shrunk by 1.6 points in the first quarter of 2022—down sharply from Q4’21’s 6.9% increase—and the Q2 level dipped by 0.9%. Despite meeting the ‘two quarters of negative growth’ threshold for a recession, the U.S. economy is faring better than expected and has in fact seen continuous job growth and stability—similar to what occurred during the 1970s. During that time jobs were lost about a year after the dip in GDP, so we are watching the job market closely for signs of stress or weakness.

Thanks to the Federal Reserve Bank of Atlanta’s unofficial, regularly updated model projection, GDPNow, economists can review current estimates of real GDP growth based on forecasts of the measurement’s 13 subcomponents. The Atlanta Fed estimates the Q3 2022 real GDP growth rate to be 16 percent as of August 17, 2022—a boost from the 0.0 percent estimate recorded on June 16, but uninspiring compared to late May’s estimate of nearly 2.5 percent.

So, what does this all really tell us about the economic forecast and how this could impact commercial real estate investment?

As nimble, forward-thinking investors, Kairos is known for its ability to quickly shift approaches based on current market conditions and implement effective risk-mitigation strategies. Here is what we have studied about the current economic, how it might evolve with inflationary factors over the next year, and what it all means for CRE investment.

1. Two scenarios are possible for the U.S. economy over the upcoming year.

Are we in a recession yet? Since, as recent news reports have reiterated, a recession is traditionally defined as two quarters in a row of negative GDP, we very well could be.

That said, unemployment rates are dropping, consumer confidence is picking back up, and inflation has cooled.

Though we can never predict the future state of our economy with absolute certainty, there are a few possible outcomes we could witness this year and next year before the market eventually corrects, depending on how the Federal Reserve responds the current environment.

While it has bumped up interest rates several times this year already and has indicated more are on the way, if the Fed chooses to react emotionally along with the market and avoids additional rate increases this year, the market could temporarily find relief and instead pick up the inflation fight next year. The U.S. could ultimately experience a rare double dip recession, or a period of time where our economy experiences an initial recession, followed by a brief recovery period and then second recession. We have not witnessed this since the early 1980s.

Alternatively, if the Fed continues to raise interest rates this year, our economy could cycle through one recession before correcting itself—even if we get back on track to maintain our typical 1.5-2.5% GDP growth.

2. Supply and demand are also promising indicators to follow.

Along with GDP, trends in supply and demand are the best indicators to follow when it comes to tracking our economic cycle. We are likely to see the market rebound once these factors are running smoothly again, despite the challenges they currently face.

GDP essentially measures changes to the country’s population growth combined with its productivity growth, and at the moment the U.S. is lagging behind on both. According to The Brookings Institution, the most recent U.S. census report indicates that our population growth has largely plateaued, and our productivity levels are hindered by issues within our supply chain.

As the U.S. grapples with skyrocketing oil prices, the industrial sector is also experiencing something I like to call “synchronized desynchronization.” While companies are in sync with consumer demand, the timing of our supply chain is at a mismatch. Warehouses are running out of storage room as the they work to fulfill backlogged orders from the pandemic’s surge in online shopping, but now consumers are shifting their focus to travel and experience purchases instead. Retailers such as Walmart and Target are even writing off losses in their earnings reports and blaming the supply chain’s disruption.

Ultimately, these factors will improve and our economic growth along with them, which makes the Fed’s attempt to control inflation through monetary policy appear to be an ill-timed and ineffective ‘fix.’

3. Lessons from Milton Friedman can teach us about responding to inflation.

Insight from the late economist, statistician and winner of the 1976 Nobel Memorial Prize in Economic Sciences Milton Friedman could help inform us on how to best confront inflation.

In my view, he was right on several of his theories, especially those surrounding monetary policy. The Federal Reserve Bank of St. Louis cites that Friedman believed the strongest way to counteract inflation was to decrease the growth rate of total spending. He also encouraged economists to consider price increases in the context of demand.

Friedman also rejected the idea of solely approaching inflation through incomes policy, or directly controlling wages and prices, and determined it was best to use monetary policy only – or controlling the economy’s amount of money available and new money supply channels.

If we are to believe Friedman and follow his philosophy, we are already on the path to controlling inflation – although we may still experience a recession as the market corrects itself due to factors currently in place.

So, how might all this impact commercial real estate?

Regardless of the method the Fed decides to move forward with, our economy is sure to make an eventual comeback and commercial real estate will remain a strong industry for investment. Turbulent financial times present a unique opportunity for savvy investors to acquire assets that make sense and sell assets that no longer align with their long-term strategies.

Our firm tends to follow a contrarian and value based investing viewpoint, which enables Kairos to successfully identify and take advantage of investment opportunities during economic cycles when others might be fearful.

* This content is meant for informational purposes only and should not be construed as a recommendation, an offer of services, or an offer to sell, or solicitation of an offer to buy a particular security or investment strategy. There are no guarantees that any specific investment strategy will be profitable or equal to past performance levels. All investment strategies have the potential for profit or loss. The views and opinions expressed in this article are solely my own.